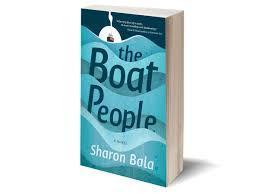 BOOK CLUB BY E-MAIL - June 16 -19, 2020
Six members participated in our third online meeting of this pandemic with treats of lemonade and oreo cookies. What a great way to end this strange and wonderful book club year. The book was The Boat People by Sharon Bala, a 400 page tome devoted to the plight of Sri Lanken refugees running from the civil war in their homeland to Canada seeking asylum. It tells the indepth story of a father, Mahindan and his six year old son who have lost everything and only want to start a new life. They are only 2 of a boat load of 500 souls seeking refuge. The story is also told through the eyes of Priya, Mahindan's reluctant lawyer and Grace, a Japanese - Canadian adjudicator who is charged with decided Mahindan's fate. It is a moral tale, uncomfortable to read in spots as it takes us inside the Canadian Immigration system and the picture isn't often the compassionate place most Canadian's assume it should be. It brings up issues around what people might participate in if they only have a life or death decision to make. It also discusses how an imperfect bureaucracy holds the power of life or death over the most vulnerable people. It's not an easy read but in some ways, a powerfully educational, inspiring, thoughtful and emotional book. It was rated 7.8/10. This is the last bookclub of the season and what happens in September will be revealed in time. The next scheduled book is Where The Crawdads Sing by Delia Owens.